1600+ students hear the story of Easter

Many members of New Plymouth Bible Chapel have again assisted in putting on an Easter play that first showed in 1991! Chapel members, with believers from 20 other churches, acted, narrated, prayed and served in food preparation and hospitality.
This is the story, as reported by STUFF:

More than 1600 year five and six students have been told the Easter Story thanks to a walk-through play, with some youngsters hearing it for the first time.

The performance took the students from the gates of Jerusalem to the garden of Gethsemane and through to the cross and the tomb where Jesus was buried. Along the way, they saw him ride in on a donkey, be betrayed in the garden and nailed to the cross, before rising again to oohhs and aahhs from the children.

Director Louise James said the event was run by the New Plymouth Christian Leaders Network and involved people from more than 20 different churches around the district. "We do it because we want to show people that there's more to Easter than Easter eggs and Easter bunnies and hot cross buns," she said. "But there's a real meaning behind it and we really believe what Jesus did on the cross." 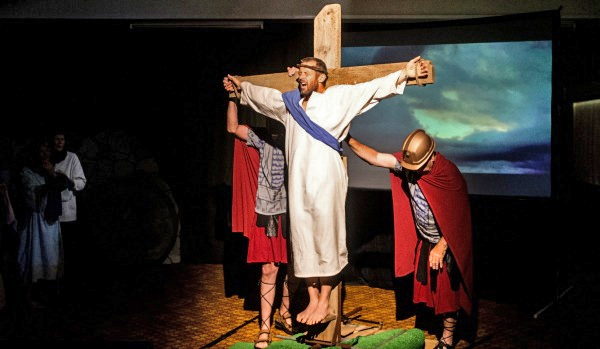 She said Rodney Dunlop, who was welcoming the school students off the buses, had been asking them what they knew about Jesus and Easter. "He said he's astonished how they don't even, some of them have never even heard the name," she said.

The play had started in 1991 and run every two years since then at the Central Baptist Church but this year moved to the St James Presbyterian Church in Moturoa for the first time.

"Some of the original cast in 1991 are still doing the same roles which is pretty amazing. Pilate, I think, is one of them," she said.

"This morning we've got 10 productions so they really have to keep fit and healthy, they're pretty tired by the end of the day." 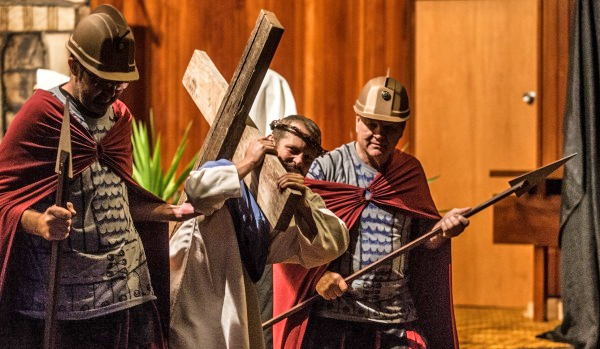 The event started on Tuesday and since then the cast and crew of more than 60 had been putting on up to 16 productions a day, with each one taking about 45 minutes to go through.